What is erectile dysfunction?

Erectile dysfunction, or ED, can be a total inability to achieve erection, an inconsistent ability to do so, or a tendency to sustain only brief erections. ED, sometimes called “impotence,” is the repeated inability to get or keep an erection firm enough for sexual intercourse. The word “impotence” may also be used to describe other problems that interfere with sexual intercourse and reproduction, such as lack of sexual desire and problems with ejaculation or orgasm. Using the term erectile dysfunction makes it clear that those other problems are not involved. 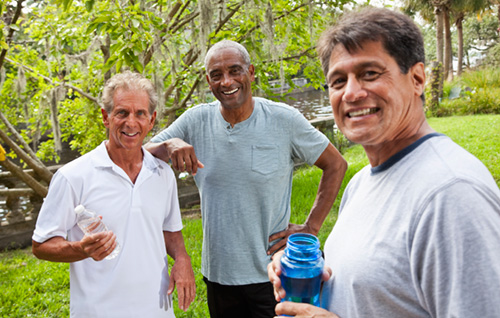 In older men, ED usually has a physical cause, such as disease, injury, or side effects of drugs. Any disorder that causes injury to the nerves or impairs blood flow in the penis has the potential to cause ED. Incidence increases with age: About 5 percent of 40-year-old men and between 15 and 25 percent of 65-year-old men experience ED. But it is not an inevitable part of aging. and is treatable at any age.

Since an erection requires a precise sequence of events, ED can occur when any of the events is disrupted. The sequence includes nerve impulses in the brain, spinal column, and area around the penis, and response in muscles, fiborus tissues, veins, and arteries in and near the corpora cavernosa.

Damage to nerves, arteries, smooth muscles, and fibrous tissues, often as a result of disease, is the most common cause of ED. Diseases, such as diabetes, kidney disease, chronic alcoholism, multiple sclerosis, atherosclerosis, vascular disease, and neurologic disease, account for about 70 percent of ED cases. Between 35 and 50 percent of men with diabetes experience ED.

Other possible causes can include:

For some men, making a few healthy lifestyle changes may solve the problem. Quitting smoking, losing excess weight, and increasing physical activity may help some men regain sexual function. Reviewing dosage of medication with harmful side effects is also an option. For example, drugs for high blood pressure work in different ways. If you think a particular drug is causing problems with erection, tell your doctor and ask whether you can try a different class of blood pressure medicine.

Psychotherapy and behavior modifications in selected patients are considered next if indicated, followed by oral or locally injected drugs, vacuum devices, and surgically implanted devices. In rare cases, surgery involving veins or arteries may be considered.

Common ED treatments can include:

The 3-piece inflatable penile implant is custom fitted to your body to allow you to have a satisfactory erection for sexual intercourse and produces a natural erection. Inflatable implants consist of paired cylinders, which are surgically inserted inside the penis by Dr. Walsh, and can be expanded using a pressurized fluid pump placed in the scrotum, which is filled by a reservoir placed in the abdomen.

The occasional performance issues in the bedroom can be normal. It starts to become a problem when you’re regularly having difficulty getting or maintaining your excitement — to the extent that you’re purposefully avoiding intimate moments with your partner. There are long-term solutions that can help you regain your confidence both in and out of the bedroom. Dr. Lance Walsh specializes in men’s sexual health and is the most qualified to discuss all of your treatment options with you, call today Dr. Lance Walsh today.

Regularly having difficulty getting or maintaining your erection?

Erectile dysfunction (ED) affects more than 30 million men in the U.S. It is especially common in men with prostate surgery, diabetes, high blood pressure and obesity. However, it is now possible to treat almost all men with ED! ED undermines a man’s sexual confidence – but successful treatment can help restore it! Many ED treatments are covered by most insurance and prescription plans. Attend a FREE Men’s Health Webinar sponsored by Coloplast Corp. to educate men and their partners about approved ED treatment options.

Erectile dysfunction (ED) affects more than 30 million men in the U.S. It is especially common in men with prostate surgery, diabetes, high blood pressure and obesity. However, it is now possible to treat almost all men with ED! ED undermines a man’s sexual confidence – but successful treatment can help restore it! Many ED treatments are covered by most insurance and prescription plans.

Penile Implants to treat ED: A penile implant is discretely placed by Dr. Lance Walsh into a man’s penis and designed to help him achieve an erection. Once implanted, the man is back in control of his body and the implant can be effectively used on demand. Call today to schedule your appointment, it would be our pleasure to help you.

It’s hard to know how many men in the U.S. have erectile dysfunction, but estimates range from 15 to 30 million. Most of the time, ED has a physical cause and can affect self-esteem, cause frustration, anger, and sadness. The good news is that ED is treatable, and at any age. Dr Walsh and NP Rolon offer many treatment options that can help, including penile implants, call today to customize what is right for you.

Erectile Dysfunction is treatable, and at any age.

Sexual dysfunction is a very common problem that affects men of all ages, and impacts the quality of life for men and their partners. Dr. Lance Walsh and FNP Katherine Rolon create customized therapies for our patients based on individual medical conditions and personal situations. Please contact us today, it would be our honor to care for your healthcare needs.

Dr Lance Walsh discussing the relation of Diabetes and Urology.